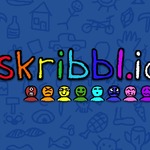 Skribbl.io at Gogy online 2020 is the newest multiplayer drawing game on the internet where players have to guess words drawn by another player. It is inspired by the original drawing game Pictionary. Join a lobby full of players from all over the world and try to draw the chosen words as good as possible so the other players can guess it. One player is drawing at a time while the other ones have to guess the correct word by typing it into the chat window on the right. If you found the correct answer your name will appear green in the leaderboard on the left side. In Skribbl.io you will earn points for the correct answer. Of course the first player to guess the right word gets the most points followed by the second and third and so on. Each player can draw 3 times in total and the one with the most points after the game ends wins the match.

Skribbl.io is an online io game which means you have to play against real players you can even communicate with. As a hint this drawing game shows you the amount of letters of the solution word right above the drawing panel. After a certain time some letters will appear to help you and the other players to guess the correct word. To be honest you don’t need these hints if the drawing is good enough! With that being said try to draw as precisely as possible.

Join your friends right now in the game to test your reflexes in the best way. It will be more fun and some other interesting game genres like Paint.io at http://gogy3.xyz/

Use the mouse to draw