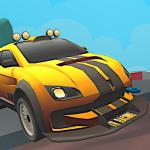 Mini Rally Racing invites you to the colorful world of mini cars. Either join tournaments or show yourself in single races in the Arcade section. Mini Rally Racing game has 1 Player and 2 Player game modes on Gogy.xyz.

Play with your friend and prove who is the good driver!

You can invite friends to join or play with other online game players around the world. Some of the same games we introduced to players such as Galactic Traffic and Draw Rider.Choose your favorite game today.