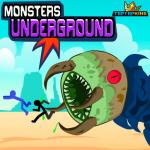 The objective of the game is to control a small worm that needs to feed but be careful that the soldiers and the army think about destroying you. Now you can play this new game evolve your monster and become the best monster in the world.

Use the arrow keys or touch the screen to move your monster.